Growing up I remember this tiny English woman who lived in our town. She had hair so blonde that it was almost white and her daughter had that same blonde hair. As a child I didn’t think too much about it. Later I learned that the lady was an English war bride. She had married an American soldier while he was stationed in England. I wish I had talked to her about it. Unfortunately I didn’t become interested in these English women who followed their hearts and left their homes across the ocean until later in life. 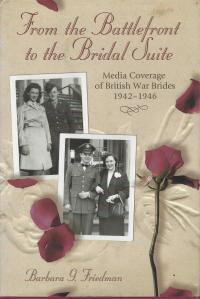 In 1946 English war brides began arriving in the U.S. They scattered across the country, some to big cities and others to small towns like my hometown. In the outlying areas the war brides were truly alone, except for their husbands. They had no family of their own nearby and, despite a common language, there were many cultural differences. In areas where there were larger numbers, brides formed groups or clubs which gave them a sense of comradeship and shared experiences.

The English girls who married American servicemen far outnumbered all the other nationalities of war brides. This is not surprising given the fact that American servicemen arrived in England in early 1942 and remained in the country until after the Japanese surrender in 1945. Three years was plenty of time for romance to develop between lonely soldiers, sailors and airmen and the local female population. An added incentive was the lack of competition from Englishmen who had been conscripted into the Royal services and sent to the far reaches of the British Empire.

I have a number of books, both compilations of stories and individual memoirs, about war brides. I recently purchased one that delves into the media coverage of the war bride phenomenon on both sides of the Atlantic. “From the Battlefront to the Bridal Suite” by Barbara G. Friedman is proving to be quite interesting and I’ve only read the beginning.

Other books about WWII War Brides in my collection include “War Brides and Memories of World War II” by Elizabeth Hawthorne, “War Brides of World War II” by Elfrieda Berthiaume Shukert and Barbara Smith Scibetta, “Promise You’ll Take Care of my Daughter” by Ben Wicks, “Memoir of a French War Bride” by Jeannine Ricou-Allunis, “Entangling Alliances” by Susan Zeiger and “Bittersweet Decision” by Helene R. Lee.

At one time I thought I might write a series of novels about World War II War Brides. The subject fascinated me and still does. These women fell in love with men from another country that they barely knew. They left their own families and the only homes they had ever know to move to a foreign country across the ocean. At that time the only communications would have been by letter, with the occasional, very expensive and very inconvenient long distance telephone call which few of these women could afford. A trip back home meant either traveling by ocean liner or by airplane, both of which were very expensive at the time. So many of the war brides never saw their families and friends again. They started a new life with only one person they knew, their soldier-turned-civilian husband. Most of the marriages lasted. Some didn’t.

You cannot deny that these young women made a leap of faith and a statement about the strength of love when they made the decision to marry an American serviceman.

This site uses Akismet to reduce spam. Learn how your comment data is processed.

To Subscribe to my Newsletter go to the Contacts page and send me a message. To Unsubscribe, do the same.

Search for Posts on this site